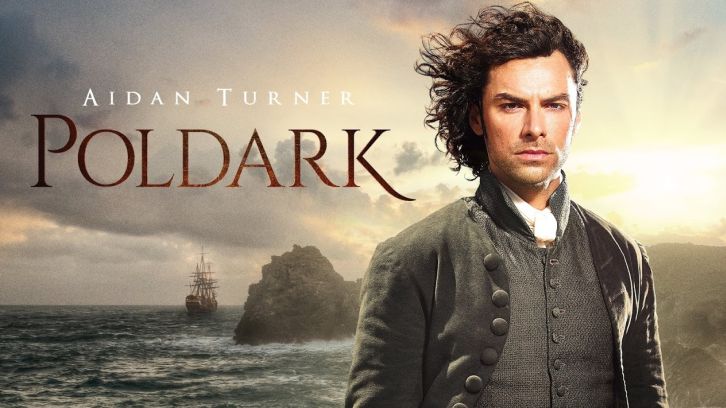 How I have missed the schemes and romance and feckless economics of 18th century England! Thankfully, Poldark returns with all that and more. It wouldn’t be Cornwall if there wasn’t a storm coming or going, and the premiere starts off with the aftermath of the season 3 finale. George is working overtime to get so much as a smile from Elizabeth, after she forcefully denounced his (actually true) fears that Valentine is not his son. At Namparra, both Ross and Demelza seem closer than ever before while never more hollow, as neither one wishes to speak about their respective flings. Politics and poverty swirl around both households, leaving little time for fragile hearts. Death casts its shadow as well. 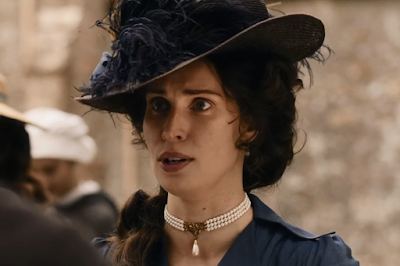 Does George Warleggan believe Elizabeth that Mini Ross is his child? He probably doesn’t, but what he does want to believe is that Elizabeth has grown to care more about him than Ross. Notice how his face lit up when she suggested they might have another child. One he could be certain was his. As for Elizabeth, her hair seems darker this season, which kind of suggests that Elizabeth has colored her hair so it's closer to Valentine's. It could just be a wig hue inconsistency though. She also wears darker colors and more jewelry than she did in earlier seasons. On a show where years and years pass without the cast growing older, it's these details that reflect time and age. George seems to have genuinely reached a point where it matters whether or not Elizabeth cares about him. He is sincere when he promises that this is a new beginning for them. The thing with how Jack Farthing approaches the character is that George is never pure evil. He’s got layers of hurt and longing.


“You have my word things will be different. I am now different.” 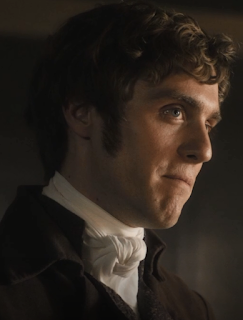 Just because he’s human, though, doesn’t mean that George Warleggan isn’t in the running for being the absolute worst. He’s home on break from Parliament, and what better activity for his vacation than trying to hurt Ross Poldark. The universe is sometimes on his side, because the Carne brothers get caught up in a riot, conveniently witnessed by a Warleggan henchman. In short, they are charged with violent assault and sentenced to HANG. They were only at the riot because they went to make sure Zacky’s son Jago stayed out of trouble, but the lad ended up scuffling with a merchant who fell and hit his head. That man died, and Jago is also sentence to hang for his “murder”. It’s a dark day for injustice.

I did not know the Riot Act was an actual act, as in a law passed by Parliament in 1714 that basically said that 12 or more people gathered together could be told to disperse by authorities if they were disrupting the peace. If they failed to do so, they could be executed. How about that! This causes a stir in the community, especially since the riot started because grain merchants were shipping food to other countries to make a profit, while everyone at home was basically starving.


“The vulgars are full of sound and fury.” Thus declares George,
straight from his own plentiful supper table.

Ross’s first thought is to protect Demelza from what is happening to her brothers. Despite their conflict last season, they clearly love each other, perhaps even more than ever. Ross is shaken to his core by Demelza’s dalliance, and he never at any point in this episode holds it against her. A far cry from when he lashed out at her in season 2 over permitting another man’s flirtation. Indeed the husband and wife cling to each other in every stolen moment they can find in this episode, as if not speaking about what has happened will allow them to pretend it was just a bad dream. When Hugh sends a letter inviting Demelza and Ross to visit him along with Caroline and Dwight, Ross doesn’t object to her going. Partially because he doesn’t want her to know her brothers are about to die and partially because he recognizes that what happens next is Demelza’s choice to make. They finally talk a little about what has happened, a little bit sad and a little bit tired that they have come to this place of uncertainty. 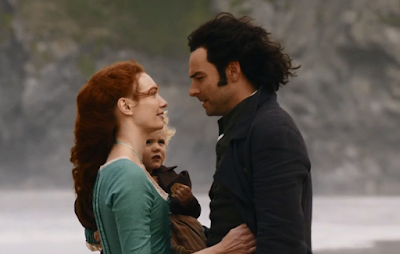 “Do you think there’s room in a woman’s heart for two men?”
“Or for two women in a man’s?” 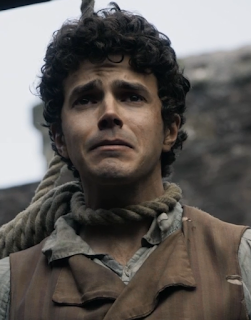 Of course Poldark is determined to save the condemned men, but the only way that can happen is with a reprieve. Sir Francis Bassett, the man with the power to save them, repeatedly reminds Ross that an example must be made to prevent future riots. He’s also still a bit testy over Ross declining to run for Parliament, a seat ultimately taken by George Warleggan who is somehow not grinning ear to ear at having Ross’s brothers-in-law on the gallows. As the brothers and Jago are led to the noose, Ross glares at Sir Bassett, but even the sound and fury of those angry eyes don’t have an impact. At this point, Morwenna comes to watch the hanging and sees Drake. He sees her too. Oh the humanity! Ross shouts for them to stop and proceeds to whip up the crowd into a frenzy by defying the magistrates. He declares that true justice would be served by sparing the men.


“Is our aim to see justice done or to terrify people into submission?” 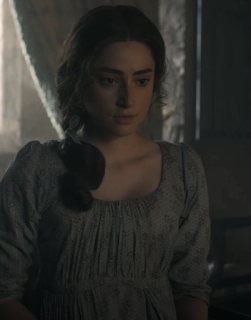 Bassett softens and orders the Carne brothers spared, but not Jago who is immediately killed. Ross rushes back to Zacky’s side, as his friend begins wailing in grief, to wrap his arms around him. Morwenna flees back to her personal hell and pretends to read a book when her insufferable husband checks on her, quietly crying over the pressed flowers hidden in her book. Demelza comes home to get the news from Ross and gathers her brothers up in a big hug. For now, most families remain intact.

It’s clear though that Bassett will want a favor from Ross for sparing the Carnes. Hugh Armitage is meant to run against George for Parliament, but Dwight spills the tea to Ross the young man is fading away. (Doctor-patient confidentiality, Dwight!) Ross will surely be asked to run instead, and he will likely win. What will this mean for George and Elizabeth’s marriage? She’s eagerly planning for their return to London, and he can’t wait to take his family away from Cornwall. What about Ross and Demelza? If he has to go to London, will he leave her behind? What will become of Cornwall without Ross, especially if his going to London meant George getting stuck at home to terrorize the locals? Demelza tells Hugh they shouldn't see each other again, and he says he'll probably die if that happens. He's such an emo. And though Aidan Turner may be the show's driving force, Eleanor Tomlinson is surely its heart and lungs. There is no other character like Demelza on TV. 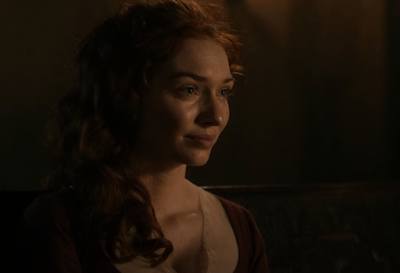 The episode ends with Demelza and Ross putting everything on the table though. Elizabeth, Hugh, their own love for each other, and where they go from here. Ross tells Demelza that a small part of his heart will always carry affection for Elizabeth, but she will never be what Demelza is to him.


“Indispensable, irreplaceable. You are the better part of me.” 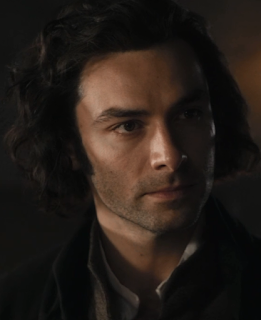 They sit together, her head on his shoulder, and his head on her head. Maybe they will be able to bridge the gap between them.

Poldark has always been a show about two wars. There’s George vs. Ross, a conflict rooted in social strata and resentment, and there’s Ross and Demelza’s ongoing battle for their marriage. Each season, more people are drawn into their lives, and the circle of impact widens. Any number of fates depend on their decisions. And when all else fails, there’s a glorious ocean to gallop past or stare at pensively.

Poor Prudie was on a guilt trip extraordinaire, thinking she had pushed Demelza into Hugh’s arms by tattling about Ross and Elizabeth’s church meeting. Demelza let her know that wasn’t what happened.

What was Elizabeth putting in George’s drink? I wasn’t sure if he noticed or not, and it didn’t seem like it was something chill like ZipFizz. I adore Elizabeth and who she is as a character. In this premiere, she was smugger than a cat that got to the cream. She might be overplaying her hand.

Aidan Turner had so many brilliant scenes in this episode, but the one where he came out of the sea shirtless but looking so forlorn that it instantly negated the bare chest factor takes the cake.

Even though it has been a while since Aunt Agatha passed, they only just got around to putting up her headstone. Somebody (cough cough) apparently didn’t want to order one for a long time.

Dwight and Caroline absolutely know about Demelza and Hugh, which provided the episode with some much-needed moments of levity. Also, Also Caroline tells Dwight she's pregnant, and Horace looks very “Lady and the Tramp” levels of put off about it. 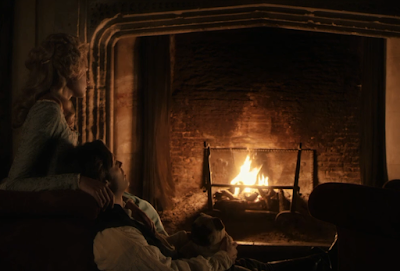