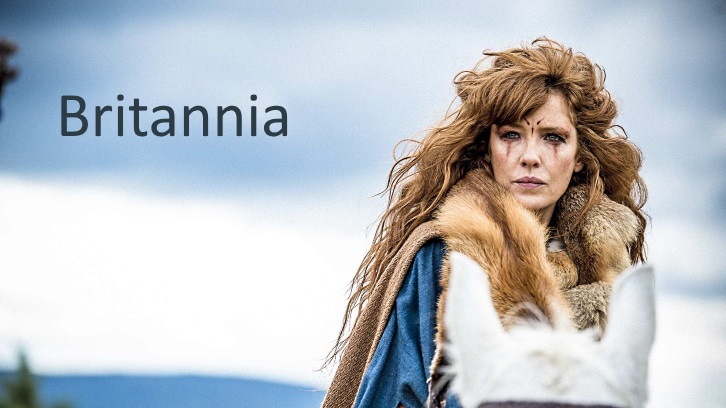 Hailing from playwright & screenwriter Jez Butterworth & the first co-production between Sky and Amazon Prime Video, Britannia is a rightly named historic fantasy series taking place at 43 AD featuring the Roman conquest of Britain. Viewers may walk away from the first season with mixed results, depending on what they expect.

The first episode sets the stage for both the story and how the series is going to operate. We're introduced to several characters spread apart. The story starts with three Roman soldiers about to be sentenced for desertion until the Roman General, Aulus Plautis (David Morissey) gives one of them a second chance: kill the other two and rejoin the empire! The one that talks the least named Vitus (Gershwyn Eustache Jnr), is the one that takes the plunge and quickly murders the other two. The man has his life, but perhaps not his freedom. 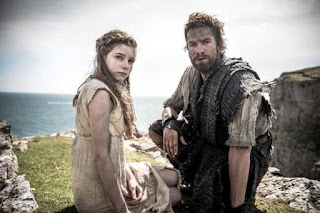 Elsewhere we meet young Celtic girl named Cait (Eleanor Worthington-Cox), whose getting ready for her right of passage into womanhood for the upcoming Solstice by getting advice from her elder sister, whose later killed. And also viewers meet Divis (Nikolaj Lei Kass), a mystic whom can travel to the underworld and has been tasked with a near impossible mission. There's also the Druids lead by creepy "second man" named Veran (Mackenzie Crook). In addition viewers witness a wedding between two tribes gone wrong, as it becomes clear after being introduced Kerra (Kelly Reilly) and her brother Phelan (Julian Rhind-Tutt), whom neither get perfectly along with their King father, King Pellenor (Ian McDiarmid), how the Romans may have the advantage when stepping upon their shores, as two prominent tribes are already fighting wars among themselves. 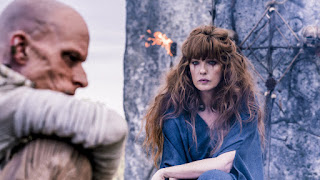 Before viewing the first episode, I was sure that Kelly Reilly's character Kerra was going to be the one to reel me in after being so found of her performance on the second season of True Detective, but I found the storyline with the young girl Cait loosing everything she had, at, what should of been, one of the best night's of her life and suddenly pairing up with the metaphysical-wandering and seemingly unurturing Divis, much more interesting.  In addition the first episode ends in plot twist where Veran and his tribe come across Roman soldier, whom sends him on journey back towards Aulus, right at the moment Aulus reveals his fascination with the magical & mystical, resulting with a Roman soldier shouting a ominous warning and Auluse commanding the other soldiers to bury him alive, while chocking to death on a letter Aulus quickly scribed and sealed to prove his own zealous counter-culture nature!! 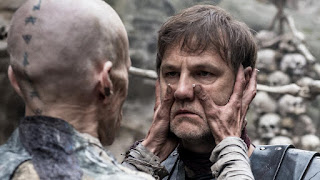 Without giving too much away the series slowly goes through the motions of Aulus seeking to conquer Britain through two rivalling clans, with King Pellenor's being the one that's primarily the focus, as his family falls apart when his daughter Kerra tries to take matters with the Romans into her own hands and is then thought to be a traitor. Veran and the Druids are called upon by the King to make a decision that comes with surprising results, especially since Aulus also tried to make a deal with Veran and, whose blind faith, makes him pleasantly more dangerous character to follow. 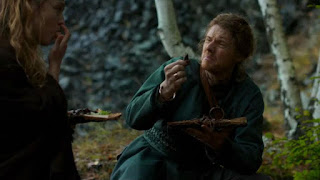 Other plots centre around Cait trying to save her father, two Roman soldiers Brutus & Philo wondering into trouble and having some existential moments of crises, Vitus getting more abused, and traces of slow mutiny emerging within the Roman army. There's also love triangles causing family strife within the tribe between Kerra & warrior Lindon (Stanley Weber), as Lindon is married to the spiteful Amena (Annabel Scholey) and Amena also seems to have a thing of Kerra's brother Phelan, but Phelan is also teased into another alleged prophecy by the niece of the other tribe's Queen, Andedia, named Ania (Liana Cornell), who claims to be a Goddess called Brenna. (And for the record, I found the Phelan & Ania pairing towards the end of the season was one of the more delightful and comedic story lines of the season).

Viewers looking for historic accuracy will be very disappointed with this series, as it operates with a with a "new age" take on the end of Britain's iron age, in which the series' mythology is often a factor, but not better explained until the finale three episodes of the first season, which could be frustrating for some. The concept of Gods, Demon Kings, prophecies, spells, tangling with certain animals, the will of the dead, and trips to underworld are all very present plot devices and interfere with various characters' choices, which presents a huge theme of calling into question ones own faith verses what's really true. 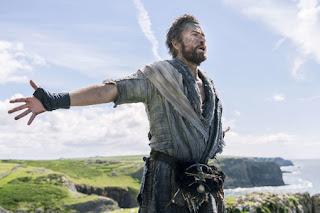 The cinematography however, is often one of best things about the series. There are such exquisite outdoor shots of the breath-taking scenic landscape that at times could be compared to Outlander or Game of Thrones. In some ways though, it's a shame when contrasted to often mediocre or simplistic darker interior scenes and/or choices & techniques used when characters are experiencing thee metaphysical, as the it's often those scenic shots that come off as more magical and majestic, while the others are more darkly-drunken, but perhaps one could argue the contrast is about the purity of Island becoming more corrupted upon the invasion? 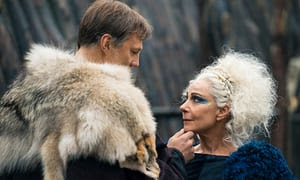 As for the cast there is some great talent here. Like mentioned above I found myself fascinated with the story of Cait played by young Eleanor Worthington-Cox, whom becomes much more of the centrepiece. Actors like David Morrissey, Ian McDiarmid, Zoe Wanamaker, and Hugo Speer bring a Shakespearean facility to the series. While Mackenzie Crook, Kelly Reilly, Nikola Lie Kass, Liana Conell, and Barry Ward provide good character acting and perhaps add some flavor with more diverse personality that helps relate to the contemporary, as a reminder of something universally and timelessly revolutionary. 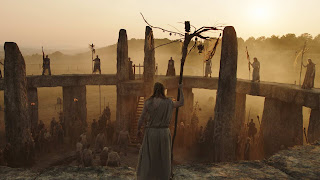 Where Britannia seems to fall short is in it's execution of plots in combination with it's eclectic anarchic spirit. The first five or six episodes have a whole lot of mystical (and pyschosexual) things happen, without a lot of explanation for why or what is exactly happening, which also doesn't help the audience feel very deeply for the majority of characters, since one never knows them long enough before they find themselves changed or philosophically at odds with other characters for the audience to feel particularly attached, --and where for a series that tends to take it's 1960's pop-culture psychedelia approach (It's opening theme song is Donovan's Hurdy Gurdy Man) rather seriously, doesn't either generate a lot of laughs or great suspense. It's problems are mostly not being able to fully captivate early on. 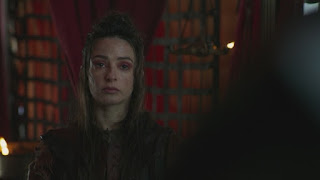 With that being said, the series does get better and becomes much more interesting in it's final three episodes, with episode six being more of a turning point that comes with a dramtic ending for Cait and Kerra in particular. (And it doesn't hurt that actress Laura Donnelly shows up in episode 8 as a pretty bad *ss character named Hella). It's true it can't live up to well-crafted historically-inspired fantasy shows like Game of Thrones or Outlander, nor does it draw the kind of horror-supernatural-suspense-thriller of say something like that of Fortitude or the short-lived Helix, but rather it tries to be inventive and brings something much closer to classic literary epics like Beowulf, The Iliad and The Odyssey, or The Aeneid, but with Shakespearean overtones similar to plays like Julius Caesar, Mark Antony, The Winter's Tale, or Othello. It's closest TV comparison might be something like Vikings meets Into the Badlands.

Over all I feel the first season is above average and is trying hard to be something different. It's not a series I would recommend to just anyone, nor would I consider it a "must watch", but instead understand it's an acquired taste for those that are patient, open-minded to historical interpretation for the sake of a story, are looking for a film adaptation of a literary epic, or want to have something differant to binge watch watch on a rainy day.